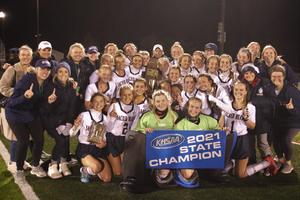 Head coach, Eleanor Mitchell, told the girls to stay "humble and hungry" and take each game one at a time. They did just that, making "one at a time" their team motto for the season. This is the second straight championship title for the Valkyries and the program's 12th. The win also marked SHA's 99th state championship honor.
Lindsay Schiavone and Sloane Wearren were named to the State All-Tournament team and Libby Parsons earned the honor of Most Valuable Player.