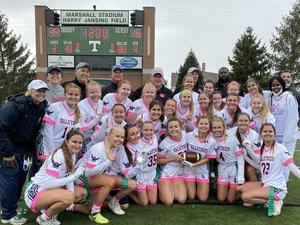 SHA's Team White, comprised of athletes representing the Class of 2021 defeated Assumption 34-6 in a Pink and White game like no other! On an unusually blustery day in April, the Valkyrie flag football team took the field at Trinity's Marshall Stadium in the annual Pink and White game - played each year to raise money for the Norton Cancer Institute Breast Health Program.
A typical Pink and White game would take place on a Friday evening in front of a sellout crowd of students and parents from SHA, AHS, St. X, and Trinity. The young men from each school would perform a dance routine, coached by students from SHA and AHS, at halftime. Breast cancer survivors and those in battle would be honored. It is a special event in so many ways.
Though attendance was limited to just the seniors from SHA and AHS, and the dances prerecorded, the special feeling was still present. Team White fought through a rare April snow to defeat the Rockets 34-6 in a day that none will forget.