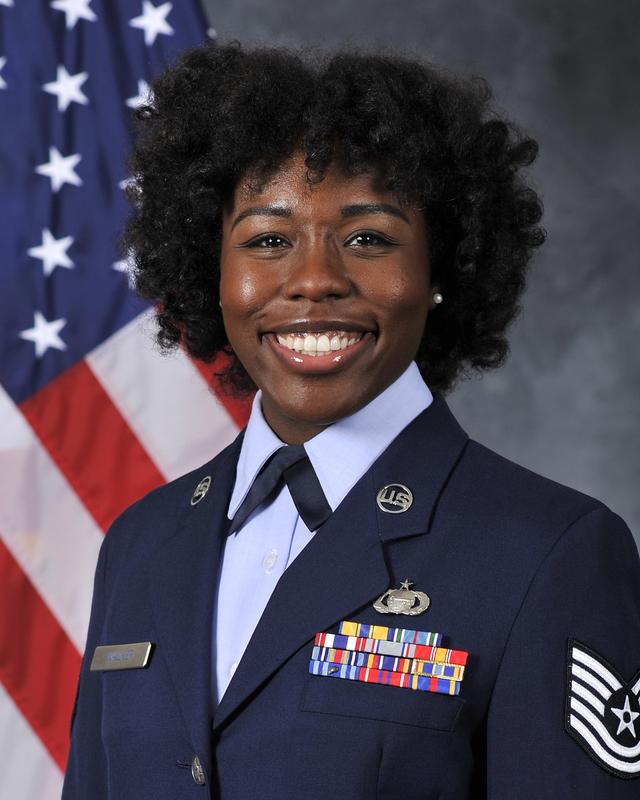 Autumn Walker, SHA Class of 2006, spent some time with me on the phone recently, from her home near Dover, Delaware. We discussed her time at Sacred Heart, her role as an Officer in Charge (OIC), Unit Support Analyst with the United States Air Force, and what our Ursuline core value of “leadership” means to her.

You’ve had quite a career in the past several years; can you share a bit of what you’ve been up to since graduating from Sacred Heart Academy?

After graduation, I attended Howard University for one year and was enrolled in the Air Force R.O.T.C. program while there.  After one year at Howard – and in December of 2007 – I chose to enlist and also work toward my degree.  At that time, I went to language school in California to become a linguist and I learned Arabic.  I ended up being better suited for a role as an analyst, so I moved on to Texas to go to school to fulfill requirements for that role and spent the next three years in New Mexico.  I had been working on my degree in Middle Eastern Studies through an online school called American Military University.  During that time, I had applied and was accepted to a Department of Defense school and earned my bachelor’s degree.  From there, I moved to Scott Air Force Base in Illinois, located close to St. Louis, MO, where I was stationed for three years.  I was a Technical Sergeant in the Air Force when I commissioned – which means I went from an enlisted member to an officer.  That was in November 2017.  After some additional schooling back in Texas, I am now in Dover, Delaware.

What does your work with the DoD entail?

I track geopolitical incidents, events and information, as well as tracking what other countries are doing.  That could mean understanding their politics, military and technology – I am expected to know a little bit about everything in order to share that information with Air Force pilots and leadership, so that they can make informed decisions about missions in a given area.

Are you focused on a specific region of the world?

I am focused on the entire world.  Currently, my work is focused on mobility missions; I work with pilots and aircraft responsible for moving cargo and people.  Cargo aircraft travel all over the world, not just one specific region.  I am helping to ensure that the people flying the aircraft have the information necessary to execute the safest possible route and transport of people, equipment and supplies around the world.

What would you say is your favorite part about the role you have currently, and in the Armed Services, in general?

One thing I love now as an officer is being able to help those who I support and oversee, to have their voices heard.  I understand where they are coming from, I’ve been there.  I also very much appreciate that the military does a good job of creating an environment of equality and equal opportunity.  As a black woman, there are certain biases and prejudices out there that people may have towards me that can affect my ability to move forward and upwards.  In the military, a lot of those biases and prejudices are mitigated, and so I feel like I have better opportunities to make rank, and be in the room with decision makers, and be a part of the conversation.

Did you envision yourself enlisting in the military as a young high school student?

No, not really!  I had some family members who served, but I did not grow up with a strong military presence in my family.

Can you share a bit about your future goals within the USAF?

Yes.  I mentioned earlier that my role as a linguist was not the right path for me at the beginning of my career, and I believe that happened for a reason.  That being said, the time that I did spend learning Arabic did inspire me as it relates to my future goals, because it ignited a passion in me for languages and cultures.  I am currently working on a Master’s degree International Relations and my next goal would be to become a Foreign Areas Officer- similar to an attaché position.  Maybe after that, I would like to join the Department of State.

Do you travel much with your career?

Yes, so far in my career I’ve been on two deployments.  The first in Djibouti, Africa in 2015 and the most recent deployment was earlier this year, from January to May in Afghanistan.  Various other projects within the military have taken me to many places within the U.S. as well.

What type of work were you doing on those deployments?

Djibouti was mostly a diplomatic mission.  We do have a base there, but we were there mostly to support the Somalian government, which has experienced government instability and terrorism in recent years.  During the deployment to Afghanistan, I was again supporting cargo missions.  Our crews were going out on flights daily and I was working to help them understand the situations happening within the airfields they were flying into.

Given your experiences outside of the U.S., what are some of the things you really cherish as a U.S. citizen?

Bathrooms!  Modern plumbing systems, electricity.  You appreciate the opportunities that we have in the U.S. as it relates to education, and even the material things we have here.  Clean water!  We are so fortunate here to have clean water and it is a major priority for the U.S. military to ensure it’s provided for our personnel overseas as well.

When going to bed at night here in the U.S., you really don’t have the fear of an attack, whereas overseas in many areas you realize people do not have that same security, and I am so grateful for it here at home.

What might you say to a current student feeling stress or anxiety over their future plans?

It is so important to live your life than to be solely focused on grades.  I know the caliber of young women that Sacred Heart is turning out, and no matter where you go, you can get a good education as a graduate of SHA.  By no means am I suggesting you forsake your studies and you definitely need to work hard while you are in high school, but try to have a balance and have fun.  You are after all, still a kid.  There is no better place than Sacred Heart to be during your formative years, and to find your voice.  Being in a classroom with other women is an empowering opportunity and will help you as young women to develop your strength and be unafraid when you move on to college & your careers.

Who was your favorite teacher?

Ms. Barnett for sure!  Ms. Cunningham; she was so smart and gave me great advice.  Ms. Zeller was another one I adored.  Mr. Reid, Madame Cross, Ms. Lenahan…so many!  I loved the front office staff.  I was often tardy, and they always had my tardy slip ready for me!

I grew up in a household where we went to church each week and my mom was a preacher.  Mr. Elsesser had to put up with me a lot in religion class, because I always had questions!

What would you say are some of the things that you still carry with you, from your time at Sacred Heart Academy?  What set SHA apart?

For me, it came down to opportunities.  First of all, the King Scholarship Program was so important.  Without it, I would have attended duPont Manual High School – and I would have received a top-notch education there as well! – but Mr. Nick King made it possible for me to attend Sacred Heart.  He gave us so much in the way of his time and willingness to expose us to so many things that we otherwise, wouldn’t have been able to see and do.  Sacred Heart provided diversity in my life too, that helped me become the person I am today.  Sacred Heart opened a lot of doors for me and as a result, I’m a fairly well-educated young woman in this world with a decent job and I’m doing the things that relate to the “American Dream."

What does “leadership” mean to you?

I would say leadership is about inspiring people to want to complete the mission.

Where do you see yourself geographically in the next several years?

I have total wanderlust!  I really enjoy traveling but I do think I will likely end up in Washington, D.C., depending on where my career takes me.

Thank you, Autumn for your time and for helping inspire current and Forever Valkyries through your story of servant leadership with the United States Air Force!