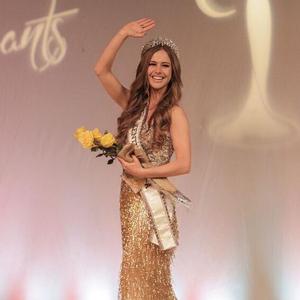 Madelynne Myers is a graduate of the SHA class of 2013, and in 2017 she earned the title of Miss Kentucky USA. During her reign as Miss Kentucky USA, Madelynne met and worked with Kentucky’s representatives in U.S. Congress, to advocate for the creation of initiatives to encourage young women to explore and enter the field of STEM – Science, Technology, Engineering and Math.

Madelynne Myers is a graduate of the SHA class of 2013, and in 2017 she earned the title of Miss Kentucky USA.  During her reign as Miss Kentucky USA, Madelynne met and worked with Kentucky’s representatives in U.S. Congress, to advocate for the creation of initiatives to encourage young women to explore and enter the field of STEM – Science, Technology, Engineering and Math.  She credits her Sacred Heart Academy teachers with nurturing her love of science and for providing her with the skills and tools not just for college, but for life.  Madelynne attended Vanderbilt University and graduated with a degree in Molecular and Cellular Biology with minors in Chemistry and Spanish, in May of 2017.  She continues her advocacy work for female equality in the STEM field, and will be working as a Clinical Translational Research Coordinator with Dr. Daniel Claassen at Vanderbilt, studying the brain disorder progressive supranuclear palsy, which is an advanced form of Parkinson’s Disease.

Tell me about your time at SHA, what you loved about it and how it prepared you for Vanderbilt University and where you are today.

Coming from Anchorage Middle School I appreciated being surrounded by women and I could be focused on my education.  I felt free to ask questions without fear of being judged by my classmates.  You really do create friendships that with women who become your sisters at Sacred Heart.  You have small classes, and in the full IB (International Baccalaureate) program, the classes are even smaller.  Teachers go above and beyond in their jobs.  One of my teachers, Sister Amina, helped me understand the differences between Christianity and Catholicism since I was not raised Catholic, by visually explaining it with a Venn diagram!

What was the motivation for you to attend Sacred Heart?

My mother wanted to find a school for me that would further continue to support the successes that I had while at Anchorage.  The IB program at Sacred Heart was a big reason why I came here; it’s one of the best educations available in Kentucky.  Unlike other schools in Louisville, Sacred Heart was so much better at preparing me not just for college, but for life.  It places an importance on integrating you with people who have different ideas than you, challenging you.  My teacher for Theory of Knowledge, Mr. Heuser, spoke with us about never forgetting to question what you are taught, because you only know what you have been told to know.

Was there a teacher or teachers that influenced you most?

Mr. Heuser for Theory of Knowledge.  I love philosophy and his class was a favorite.  Also, Mrs. Zeller for Biology HL.  She would clearly present complex subjects & systems of the entire body in a fun way, not in an intimidating way.  Ms. Barnett was my Mathematics SL teacher.  I loved the funny phrases she would use in class, and she would work with you on problems depending on what pieces and parts you were having challenges with.  She helped you to know what questions you needed to ask to get to the answer.  When we’d get a math problem correct, she’d say “Praise the Lord and pass the biscuits!”

How well prepared were you when you headed off to college at Vanderbilt?

Some of the classes that I had – especially in math and biology – required the same time commitments for studying, and because of that and the caliber of my classes at Sacred Heart, I felt well-prepared for college.  Having men in my classes was an adjustment, but because of my time at SHA, I already had confidence walking into the classroom to command it and not be intimidated by my peers.  I think SHA also made me ultra-competitive because of our rivalry with Assumption (I played lacrosse).  I was a fun person to have on an intramural team at Vanderbilt!  I played intramural lacrosse and I played flag football and was on the dance team for my sorority.

What have you been up to since graduating from Vanderbilt?

I won the title of Miss Kentucky USA in January 2017, and since then I have visited about 75 counties in Kentucky and participated in 85 charity events.  I’ve done a lot of public speaking which was how I ended up speaking at the United Nations earlier this year, and I will be speaking at a summit later this year as well.   We worked a lot with Best Buddies (https://www.bestbuddies.org/kentucky/); the Miss Kentucky USA team had the highest amount of money raised for the Best Buddies walk last year!  I’ve also worked with the Cystic Fibrosis Foundation and St. Mam’s (St. Matthews Area Ministries).

What have you been doing since your Miss Kentucky USA reign ended?

My term was for one year, during which I competed in the Miss USA competition.  During my term, my main platform was advocating for gender equality in the STEM field.  I have met and worked with our Kentucky representatives in Washington, D.C. all 6 of whom were great to work with.
My term ended in January, but I am still very much a part of the community of Miss USA, and am still in touch with my director and friends I made throughout the experience.

I plan to pursue a career in medicine, and I currently have a position at Vanderbilt studying PSP (progressive supranuclear palsy – an advanced form of Parkinson’s Disease).  There is a large study underway at Vanderbilt to test a treatment to slow the progression of the disease.  It’s very exciting to be working on a project that gives hope to so many suffering from this disease.  The study of neurobiology is also near and dear to my heart, because my grandmother had Alzheimer’s and my grandfather had Parkinson’s.  It has really helped me come to grips with what has happened in our family and what may be possible in the future for patients suffering from these same diseases.

What is the one thing from your time at SHA that is your most cherished memory or tradition?

The strength of my faith for sure.  In that community at Sacred Heart, you don’t feel so alone.  Flik cookies and lunchtime of course!  And, when we beat KCD in the state tournament.  Seeing the team pull out the win was so much fun.  We decorated our cars, celebrated seeing ourselves on the news, and relished in seeing our hard work pay off in that moment of my senior year.  It was the best way to go out!

How do you stay connected to your classmates?

Facebook for sure; we have a 2013 Class Facebook page that we use to keep in touch or discuss our upcoming 5-year reunion!  I also stay in close touch with my best friend Caitlyn Barnes, who I was introduced to during my freshman year at Sacred Heart.  We’re still friends nine years later!

Would not have had the confidence to pursue my wildest dreams.  Sacred Heart was my safe-haven and it taught me that failure is not failure at SHA, it is just an opportunity to learn.

What does leadership mean to you and what advice would you give to a SHA student today about leadership?

A leader to me is not someone who is up on a podium…they are in the middle of the pack encouraging everyone to move forward as a group.  They are invested in the care, love, health and education of everyone around them.  You don’t have to be at the front of the group, you don’t have to stand out, it’s just the small things that you do to show that you care.  The best advice I’d give to a girl at SHA today would be, when you speak you are not listening, and so be silent and listen to the voices of others around you.  That’s when you will learn the most.  You can hear the experiences of others and better understand different situations and perspectives that will enable you to help others